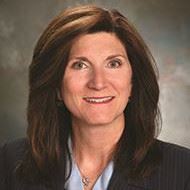 Terri was born and raised in the Cajun realm of Southern Louisiana and earned her bachelor’s degree at the University of Southwestern Louisiana, now called the University of Louisiana at Lafayette. After graduation, Terri joined the U.S. Air Force where she spent 25 ½ years serving our country in many different capacities.
Upon returning to Montrose, Terri held the position of executive director for All Points Transit (APT) from July 2008 until June 2013. During her tenure, Terri helped APT grow from 24 to 39 employees and increased assets from 18 to 30 vehicles. She expanded service to encompass over 3,400 square miles, including Montrose and Delta counties and Norwood in San Miguel County.

One of her most memorable successes was assisting the local Disabled American Veterans Chapter in 2009 by taking over scheduling all medical trips for disabled veterans. This collaboration continues today. In September of 2010, under Terri’s leadership, APT started the Montrose City Bus Flex-Route Service. In that same year, APT was recognized as the “Colorado Medium Transit Agency of the Year” by the Colorado Association of Transit Agencies (CASTA). In 2012 APT received a national transit award for Outstanding Public Service from the Federal Transit Administration.

Terri began her new role as HR director for the City of Montrose in June 2013 where her team created an employee on-boarding and orientation program that enables new employees to hit the ground running and provides a foundation for their stay with the city. She also helped the city to better align performance with expectations by working with the team to change the performance management process and create a city-wide leadership training program.

Terri holds a Master of Public Administration degree in Human Resource Management. She is married to Chris Wilcox, who was raised here in Montrose. Chris works at Colorado Mesa University, Montrose Campus, as a student counselor. They have a child of the furry variety named Pearl and enjoy the multitude of outdoor activities available on the Western Slope including camping, hiking, fishing, boating, biking, skiing, snowmobiling, and 4-wheeling.