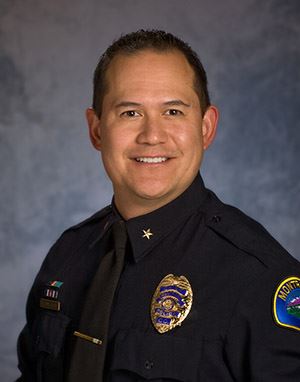 Blaine started his law enforcement career in 1997 when he was hired as a police officer by the Montrose Police Department. He served as a patrolman and detective until 2005 when he was promoted to the rank of sergeant. He was later promoted to the rank of lieutenant and then commander before being selected as the next Montrose Chief of Police. Blaine has served on several boards to include the 7th Judicial District Victims Assistance Law Enforcement board and the Montrose Community Foundation grant board.

Blaine was born in Grand Junction, Colorado and spent his childhood growing up in the Orchard Mesa area. He attended Grand Junction High School and Mesa State College before being selected as a police officer in Montrose.  Later in his career, he attended Colorado State University (Global Campus) where he earned a bachelor’s degree in Criminal Justice Management and a Master’s Degree in Management/Law Enforcement Administration. Blaine is also a graduate of Northwestern University’s Police Staff and Command School, and the Federal Bureau of Investigation’s National Academy.

Montrose is now considered his home, as he’s lived here for the last 21 years. Blaine and his family enjoy all the amenities Montrose has to offer including camping, fishing, skiing, and hunting.

His number one goal for the Montrose Police Department is to increase public safety for the citizens of the City of Montrose through the use of community policing programs and focused efforts towards reducing crime.